Ortiz: Slump Due To Injury, Not Boston Globe Story 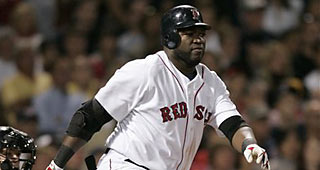 David Ortiz says a sore oblique muscle, not a controversial story in the Boston Globe, sent him into a slump last week.

Ortiz has been dealing with tightness in his left oblique muscle since he hurt it swinging the bat in Texas on the first weekend of May. Ortiz entered Tuesday night's game with just one hit in his previous 20 at-bats, but hit a three-run home run in the first inning.

"I'm going to keep on playing," he said. "It's not at the point where it's getting worse. Hopefully it won't get any worse. It bothers me on some swings that I take. Last week I was watching some videos of outside pitches I was kind of pulling. When you get to the point where you want to drive the ball the other way and the next thing you know, you're hooking the ball, that's not normal."

Ortiz said that a Boston Globe column suggesting he was suspected of using steroids had not distracted him into a slump. "Not really," he said, though he has expressed anger at columnist Dan Shaughnessy.