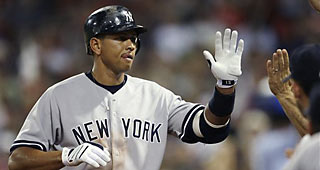 Joe Girardi ruled out returning Alex Rodriguez to shortstop following a 6-4 loss in 12 innings to the Tigers on Saturday night.

Rodriguez played shortstop until he was traded from the Rangers to the Yankees in 2004.

“No, I wouldn’t do that,” Girardi said of playing Rodriguez at shortstop. “It’s just been too long.”

Rodriguez returned to the starting lineup after being benched for Friday’s decisive Game 5 against the Orioles.

Eduardo Nunez was added to the Yankees roster to replace the injured Derek Jeter.