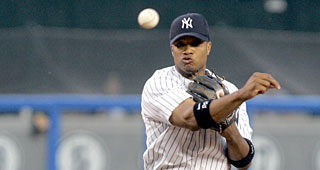 Yankees second baseman Robinson Cano strained his hamstring Sunday night and left the second game of a doubleheader against the Marlins in the sixth inning. Cano hit a double to right-center and pulled up as he was nearing second base. He grimaced and reached for the back of his left leg. After being checked out by a trainer and New York manager Joe Torre, Cano came out of the game. Cano went 1-for-3 in the opener, leaving him with a .325 batting average going into the nightcap.