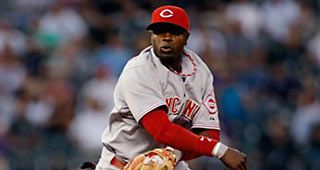 Reds second baseman Brandon Phillips wants a new contract, but he isn't going to give the team a hometown discount. Phillips said his concern was genuine that Wednesday would be his last game at home as a Red. "I couldn't sleep last night," he said. "I didn't go to sleep until like 5 in the morning. I'm surprised I got some hits today. You never know your future. They could not pick my option up and I could become a free agent. That was an option. It was a sad night for last night. I couldn't sleep. I remember the way (Aaron) Harang was acting. He was crying and stuff. I wasn't crying. Don't get me wrong. I'm a sensitive individual. But the thing is you never know this game. It's a business." Phillips often says how much he loves playing in Cincinnati. That, however, doesn't mean he'll except a hometown discount. "No bueno," he said. "This is my last contract. There's no homeboy hookup. That ain't going to work. I want to be paid what I'm worth."