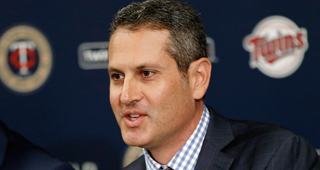 The temptation to pile it on the Mets this week was strong, after their sweep at the hands of the Marlins over the weekend and the ensuing rumors that manager Mickey Callaway might be taking the fall for their very disappointing, very Metsy season (along with a bizarre Yoenis Cespedes injury). But… I just wrote some depressing words about the Indians’ season, too, so maybe it’s time for a pick-me-up instead. Let’s take a moment first to appreciate the 2019 exploits of the team that has wrested the division away from the Indians, the Minnesota Twins, and try to determine whether or not they’re actually as good as they’ve been.

The Twins had one of the better offseasons in the American League, and now they’re having the second best regular season, with a 32-16 record that is second only to the Astros, and a +81 run differential that also trails only Houston. Unlike the Astros, however, they play in a division where only one other team is even sort of trying to contend, and oh how they’ve feasted. And they’ll have the continued opportunity to do so, given that they have the easiest schedule left in either league.

But the real question is whether they will be able to continue winning at this rate. Are they just benefiting from playing in the easiest division in baseball and from the fact that their ostensible competitors in Cleveland can’t do anything right? On the offensive side of the ball, there have certainly been some surprising developments, as one would expect from a team that went from 15.0 fWAR, 9th in the AL, last year but is currently sitting in 2nd place and already nearing their 2018 total with 11.7 fWAR through 48 games.

Byron Buxton was long a fascinating player, one who ranked much, much higher in the prospect lists than Polanco as a consensus top-prospect. But he’d consistently failed to hit at the major league level despite his prospect pedigree. His best season, for 3.5 fWAR in 2017, was heavily reliant on his excellent baserunning and defense, as he only hit for a 90 wRC+ that season. He’s dealt with a mess of injuries, not to mention minor league demotions, in his four prior seasons, but he’s hitting .262/.325/.490 (112 wRC+) this season. Like Polanco again, Buxton is just 25, and given the tools that he always had, there’s no reason to assume that, even with a bit of a decline, his ability to hit at a league average level, which would still make him a quite valuable player given his other skills, would be out of reach.

There’s a lot of players doing what we more or less expected. C.J. Cron is doing basically exactly what he did last year (.256/.322/.519, 119 wRC+, 12 HRs), Eddie Rosario is having another solid year and Jonathan Schoop is continuing with his rake-every-other-season narrative. But the truly surprising breakouts have come players we probably weren’t expecting.

Twenty-five-year old catcher Mitch Garver was always considered to be an offense-first catcher, but he worked on his defense skills this offseason, improving his framing skills mightily. His hitting followed suit, as he got off to a .329/.418/.747 (201 wRC+) start that would be absolutely insane if he kept it up for a whole season. He already didn’t because of a collision at home plate (although he’s expected back before too long). But even when things have gone wrong for the Twins, things have seemed to work out this year.

While some of these good things aren’t going to last, there’s reason to believe that, generally, the offense can hang around, especially given just how bad the offenses are in the rest of the division. And, hey, maybe Miguel Sanó will even break out now that he’s returned, too, since everyone else is doing it. So what about the other side of the ball? The pitching staff as a whole ranks 5th in the AL with 6.8 fWAR and is carrying a 3.82 ERA/3.99 FIP.

The starters taking the biggest steps forward for the Twins have been Martin Perez and Jake Odorizzi. Odorizzi has a 2.38 ERA/3.24 FIP and 1.4 fWAR that are more in line with the pitcher the Rays were hoping he would be for so long. If he’s turned a corner, that would be a boon for the Twins’ season, but he’s still walking a lot of hitters (3.23 BB/9) and giving up a lot of fly balls (48.9 FB%), while the number of those flies that are getting out of the park have dropped quite a bit (6.2 HR/FB% in 2019 vs. 10.4 for his career). There haven’t been any huge changes in his arsenal or velocity, and we’re still aways away (approximately another couple hundred batters) from being able to trust in his newfound ability to limit homers. It could happen, but there’s at least some reason to be skeptical.

Perez’s improvements, on the other hand, have a much easier explanation. His velocity has ticked up a couple of MPH across his pitch selection and he’s incorporated a cutter into his repertoire. Per Fangraphs, that cutter is officially the most valuable cutter in all of MLB, and the only pitch of any type ranked higher is Justin Verlander’s slider. It’s easy to understand why since hitters have a .104 AVG and .156 SLG against it. He’s been throwing it 34% of the time, too, making full use of it, en route to a career-best 2.89 ERA/3.37 FIP.

I only mentioned Perez in passing when looking at the Twins’ offseason because I didn’t see any reason to be excited (given his career 4.52 ERA, 4.37 FIP, 5.69 K/9 and 3.23 BB/9), but there’s every reason to be excited about the changes that Perez has made now that he’s healthy (and he’s still only 28 which certainly surprised me). And it’s not just terrible teams he’s pitching against, either, as he shut out the aforementioned Astros for eight innings a few weeks ago.

José Berríos has actually been the Twins’ best pitcher by fWAR (1.5), given that he’s pitched more innings than Odorizzi or Perez, and he has a 3.39 ERA/3.65 FIP. But unlike the former two pitchers, he was actually a pretty valuable pitcher last year, so it’s not surprising to see him doing well. But things get a little iffy after that. Kyle Gibson has been fine (4.47 ERA/4.02 FIP) for a back-of-the-rotation pitcher, but Michael Pineda (5.43 ERA/5.59 FIP) has not. The only other pitcher to receive a start for Minnesota this year, Kohl Stewart, really struggled in a couple of starts.

The Twins don’t have much depth in the rotation, but that’s a solvable problem. The draft is just a couple of weeks away and then Dallas Keuchel will be available for only dollars, no draft pick attached. They certainly have the money to do so, as they don’t have much in the way of long term commitments (just north of $10 million come 2021), thanks to all the short-term deals they made this offseason.

If they want a brand name in their bullpen, the same goes for Craig Kimbrel. They don’t have as pressing of a problem in the bullpen, but they could probably use another arm there. Too bad they traded Ryan Pressly, who has a 0.00 ERA/0.99 FIP, to Houston last year.

This is also our first season of only a single trade deadline, which means that teams are going to have to decide much sooner whether they want to be buyers or sellers. The Giants will likely shop both Madison Bumgarner and Will Smith, for instance, and there’s a lot that can happen by July 31 to make other arms available as well.

Whether you want to credit manager Rocco Baldelli’s chill new style, luck, the lack of quality competition, or anything else, the Twins have been really, really successful this season. And they don’t even have to be quite as good as they’ve been so far this season to make the postseason, thanks (again) to who they play most of their games against.

Fangraphs now has them at a 91.1% chance to make the postseason, while Baseball Prospectus has them at 89.9%. Those are pretty impressive odds, considering preseason projections, and that doesn’t even account for the fact that the Twins could clearly add a player (or players) to make up for their lack of depth, especially on the pitching front. The Indians might have set themselves up for failure, but the Twins set themself up for success, and now we just have to see if they can capitalize on it.