The Morning After: What Was Buck Showalter Thinking? 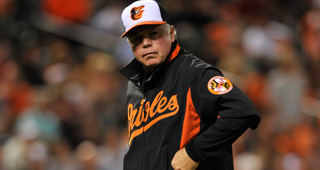 My heart goes out to Orioles fans today. The Wild Card playoff is a fickle, fickle mistress. She giveth (the possibility of a one-game playoff to make the “real” playoffs) and she taketh away (because one team is definitely going to go home deeply sad). We all know that anything can happen in the world of one-game sample sizes. If a one game series is essentially a crapshoot, what we saw last night in the AL Wild Card game between the Blue Jays and the Orioles was a crapshoot where somebody just plain forgot to roll one of the dice.

That the Orioles lost the game in and of itself isn’t the issue, here, as they only had four hits all night compared to the Blue Jays, who had nine. When your team has four hits, there is a veritable cornucopia of ways to lose a game. The issue here is that Zach Britton did not appear in the AL Wild Card Game, despite getting warmed up three different times. Was something wrong with Britton?

Buck Showalter on Zack Britton: "He was fine."

Nope. If you have a Cy Young-level reliever on your hands and you don’t bring him into an elimination game which was tied for five innings because of the old school “closers don’t pitch in tie games on the road” mentality, there’s something wrong. There’s a reason that Britton’s name is even in the mix for Cy Young award, and it’s because he’s one of the best relievers in baseball. Not to belabor the point, but obviously he was also the best reliever available for the Orioles, by whatever metric you choose.

Of course, the logic behind Showalter’s decision was that you want to keep Britton so that you have him available for a save situation, but the problem with that old-school train of thought on closers was on full display last night, and how. While it’s not true that Britton could have won the game for the Orioles, it’s certainly true that he gave them the best chance to stay alive long enough to win it. Jimenez would still have been available after Britton pitched an inning or two if the Orioles couldn’t knock in a run. They might very well have still lost, even with Britton pitching, but it was certainly a less likely outcome than what ended up happening. After all, we’re talking about a reliever that’s given up one home run all year in 67 innings and only 4 earned runs the entire time.

As a baseball fan with no skin in the AL game last night, I have to say that I’m very, very excited about the upcoming Rangers-Blue Jays series. How could you not be? Cue the montage:

But I am glad I’m not in Buck Showalter’s shoes today. Sure, Britton pitching wouldn’t have won the Orioles the game. They still would have needed to score at least one more run for that to happen. But Showalter didn’t give his lineup the best chance to do that, which is unforgivable. It’s one thing to lose an elimination game, it’s another to lose an elimination game when you didn’t do everything you could to win it, and that’s precisely what happened last night, and now Showalter will have the rest of October and the offseason to play “what if…” What was Showalter thinking? He wasn’t.