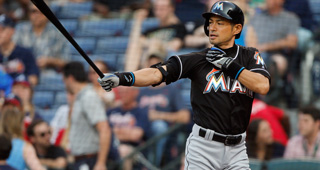 All too often, baseball reminds us that we are dust and to dust we shall return. The best players in the sport are skewing younger, and we are constantly accosted with news of older players succumbing to tweaked hamstrings and various other ailments of advancing age. So it is always a glorious thing when a player stands up to Father Time and says, “Screw you.” Which is why we’re here, to talk about the second oldest player in MLB, Ichiro Suzuki.

Ichiro’s list of accomplishments is long. Very long, such that it would be silly to attempt to cover them all in an article such as this, where we want to talk about his current play. However, we should at least cover some of them, you know, for context, in case you forgot. After being one of the first position players to come over from Japan in 2001, Ichiro proceeded to lead the AL in batting average (.350) and all of MLB in hits (242) and steals (56) en route to winning the AL MVP and Rookie of the Year awards. That was just the beginning of the epic story of a man (nay, a wizard) who crossed an ocean to rain down hits from sea to shining sea.

Ichiro is currently second in active players for hits with 2,965 (only 35 to go, health willing). The only person ahead of him on list, Alex Rodriguez, played his first season in 1996, so he had a bit of a head start. For 10 straight years, from 2001 to 2010, Ichiro either led the league in hits (in 7 of the 10) or came in second. He’s one of the fastest to first of all time and the “modern infield-hit king.” We could go on and on, but let’s move on to his current season, where he’s currently hitting .323/.388/.376 and putting up his best numbers in years.

To begin, let’s take a look at Ichiro’s selectivity at the plate. The information on plate discipline from Baseball Info Solutions only goes back to 2002, so we can’t include his rookie year, but you don’t really need that to see how impressive Ichiro’s 2016 is. Ichiro is swinging at less pitches outside the zone and his 25.3% number for that stat is his best since 2006. In terms of contact, Ichiro is making it on pitches outside the strike zone at a rate of 84.3%, tied for his best season with his 2015. Pitches inside the strike zone? A career best at 96.1%. It doesn’t take a genius to put those two nuggets together and deduce that Ichiro’s contact percentage (92.7%) is the best season we have data from.

All of those plate discipline stats above indicate that we’re looking at an Ichiro who is being more selective than ever. Sure enough, his 4.8 K% is the lowest of his career. By K%, his best season was his first, where it was 7.2%. His career K% is 9.8, which he’s effectively halved so far this season. Walk rate? His 9.6 BB% is also the best of his career. It’s not just that he’s bettering his past self here, he’s also bettering everyone else currently playing baseball. For batters with at least 100 PAs, he currently leads the league in walk-to-strikeout ratio (2.00) and it’s not even close, as Carlos Santana is next on the list at 1.28. His aforementioned 4.8 K% also leads the league for players with as many appearances.

Ichiro is clearly playing less and he’s also being platooned more. But he’s still playing, and he’s still hitting (and not as a designated hitter, either, but as an outfielder), so here’s what you can do with your small sample size gremlins. So, let’s all just take a moment and appreciate Ichiro. If he’s able to help the Marlins back to the postseason for the first time since they won the World Series in 2003, so much the better. Regardless though, it’s just a beautiful thing to have him not only still playing baseball, but playing better than he has in years. His only elder still in the game, Bartolo Colon, may get more attention, but please do not ignore the Ichirenaissance. May the hits never end.