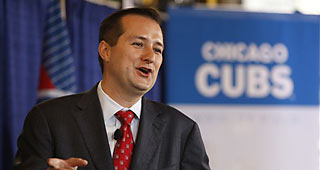 Tom Ricketts is denying the perception that Major League clubs are flush with cash, discussing the topic with ESPN.

The Chicago Cubs owner says yearly revenues are mostly put right back into the team.

"Here's something I hope baseball fans understand," Ricketts said. "Most baseball owners don't take money out of their team. They raise all the revenue they can from tickets and media rights, and they take out their expenses, and they give all the money left to their GM to spend.

"The league itself does not make a lot of cash. I think there is a perception that we hoard cash and we take money out and it's all sitting in a pile we've collected over the years. Well, it isn't. Because no one anticipated a pandemic. No one expects to have to draw down on the reserves from the past. Every team has to figure out a way to plug the hole."

Ricketts acknowledged he couldn't comment specifically on the labor negotiations between MLB and its players as they work toward restarting the season.