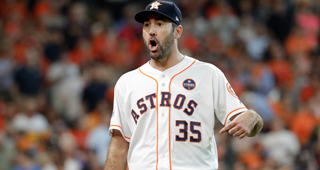 The Houston Astros have rounded out their rotation for the first three games of the World Series.

After Gerrit Cole takes the mound in Game 1, Justin Verlander and Zack Greinke will follow.

As the Game 3 starter, Greinke will get to hit in the National League park.

He has a .225 career batting average with nine homers, including three this season for the Arizona Diamondbacks before he was traded to Houston on July 31.