Bruce Bochy Hopeful Giants Will Have Johnny Cueto In September 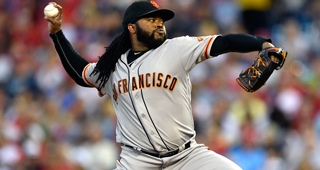 Johnny Cueto is nearing his return to the San Francisco Giants a year after undergoing Tommy John surgery.

The right-hander threw 49 pitches in 2 2/3 innings in his third rehab start at Class A San Jose on Thursday.

The club's initial plan was for Cueto to make at least two more rehab starts after his outing Thursday, but that could change.

"The way he is throwing, he will be pitching for us in September," Bruce Bochy said.

The Giants enter the weekend 3.5 games back in the National League Wild Card race.