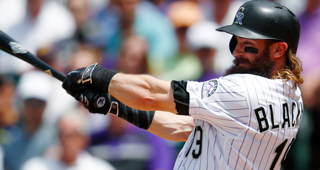 Charlie Blackmon had 15 hits in the Colorado Rockies' four-game series against the San Diego Padres.

The previous record for hits in a four-game series was 14 -- Buck Jordan of the Boston Braves against the Cardinals, July 17-18, 1934 (consecutive doubleheaders); and Bill White of the Cardinals against the Cubs, July 12-15, 1961.

Blackmon had four hits in each of the first three games of the series.

"The beauty of Charlie is the consistency, day in and day out," Bud Black said. "That's one of Charlie’s strengths, what he does each and every day to prepare to play. He's one of the best I've seen. When you're in a good spot, Charlie is able to maintain it -- which he has done for this stretch of games."