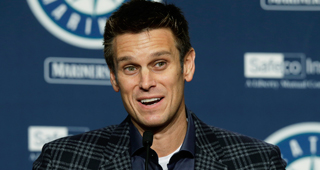 Jerry Dipoto was released from a hospital Thursday, hours after completing a trade from his bed during baseball's winter meetings.

The ciub said Dipoto was driven to an area hospital by Mariners officials Wednesday "out of an abundance of caution." Dipoto made improvements into Thursday and was released later in the day, the team said. He was expected to fly home to Seattle on Friday.

Despite being sick, the 50-year-old Dipoto dealt Carlos Santana to the Cleveland Indians in exchange for Edwin Encarnacion on Thursday.