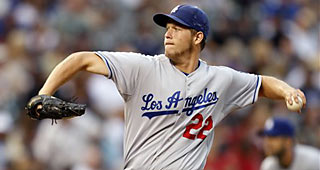 Saturday's rainout of Game 2 of the National League Division Series complicates the Dodgers' plans of bringing back Clayton Kershaw to pitch on short rest in a potential Game 4 on Tuesday, which manager Dave Roberts confirmed had been "on the table."

The postponement means that Rich Hill, now scheduled to start Game 2 vs. the Nationals on Sunday at 10 a.m. PT on FS1, would be on short rest if the Dodgers wanted him to pitch Game 5, if necessary, on Thursday in Washington, which was the original plan. Because of Hill's history with finger blisters, Roberts said pitching Hill on short rest is illogical.