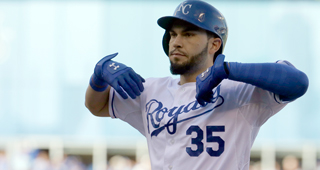 Eric Hosmer was named MVP of the All-Star Game on Tuesday as he accounted for half of the American League's production in a 4-2 win over the National League.

Hosmer hit a second-inning home run off Johnny Cueto, the first member of the Kansas City Royals to go deep in an All-Star Game since Bo Jackson in 1989.

He won a truck as part of being named MVP and said he was giving it to his dad, Michael, who stood off to the side.

"So he can stop stealing all my cars,'' Hosmer said.