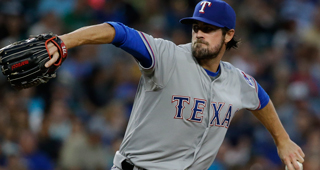 Hamels, who filed the suit in Philadelphia, alleges that Cornucopia Events failed to get him and his wife into the 2015 New York City lingerie show even though he paid nearly $70,000 for three VIP packages.

The suit says the money was to cover a four-night stay in a luxury hotel, a limousine with champagne, access to exclusive restaurants and goodie bags.

The suit alleges that Hamels and his party got none of the perks and were denied entry to the event.