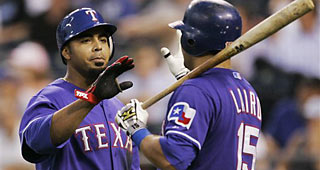 The Rangers aren't worried about losing Nelson Cruz any time soon to a lengthy suspension due to his involvement in Major League Baseball's ongoing investigation into the Miami-based Biogenesis clinic.

Nolan Ryan said, based on his talks with MLB, the investigation is going to be a "long, drawn-out affair."

Cruz, who could be facing a 50-game suspension, said last week that he hasn't talked to MLB investigators yet.