Dave Roberts says Clayton Kershaw, Rich Hill and Kenta Maeda will start the first three games of the NLDS, in that order.

In addition, the Dodgers have announced that Yasiel Puig will make the postseason roster.

"He's earned it," Roberts said of Puig, who has made it back from an early August demotion to the Minor Leagues.

After the first three games of the postseason, the Dodgers will either come back to Kershaw on short rest or add a fourth starter to the mix. 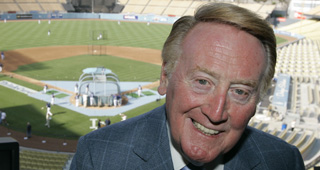 The Dodgers wrapped 67 years of Vin Scully's career into an hourlong on-field ceremony Friday night, and nobody seemed to mind one bit that first pitch was pushed back some 37 minutes.

Scully, the legendary broadcaster who was inducted into the Baseball Hall of Fame in 1982, will retire following next Sunday's game at San Francisco. At 88, he has just six games remaining behind the microphone, counting Friday night's matchup between the Dodgers and the Rockies. 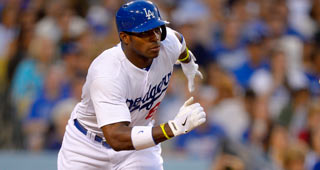 A day after Yasiel Puig and Madison Bumgarner feuded on the field, Puig sent Bumgarner a t-shirt with '#DONTLOOKATME' in block letters across the front.

Puig signed the t-shirt and wrote "I LIKE YOU" as well.

Bumgarner yelled "Don't look at me" to Puig during Monday night's altercation.

Several Los Angeles Dodgers players had taken pictures of themselves in shirts of their own earlier in the day, with their hands over their eyes. 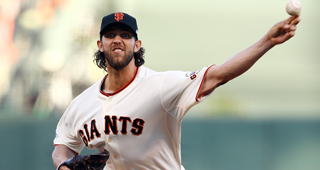 Benches emptied between the San Francisco Giants and Los Angeles Dodgers after an at-bat between Madison Bumgarner and Yasiel Puig on Monday night.

The confrontation began when Bumgarner fielded a ground ball by Puig and fired to first for the third out in the seventh inning. Bumgarner emphatically shouted, apparently celebrating the final out. But it appeared Puig thought Bumgarner was shouting at him, which led the two to exchange words and the benches to clear.

No punches were thrown, but each side traded several pushes and shoves.

It was at least the third time they have exchanged heated words on the field, though it was the first known instance since September 2014.

In May 2014, after Puig hit a 431-foot home run to center field and flipped his bat, Bumgarner took exception and waited for Puig as he rounded third base before the two exchanged pleasantries as tempers flared.

Four months later, on Sept. 23, 2014, Puig made a move toward the mound after he was hit by a Bumgarner pitch. More words were exchanged before the benches cleared and bullpens emptied, and Puig had to be held back by an umpire and several teammates. 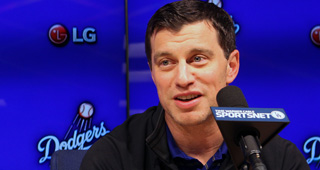 Kenley Jansen is set to become a free agent after the season and foresees a "tough" choice on the open market.

Jansen, who the Los Angeles Dodgers would like to re-sign, plans to explore the market and find the contract that's best for him and his family.

"LA's nice. LA's great. LA gave me the opportunity. LA converted me when I failed as a catcher," Jansen said. "I'm grateful about it, and will never forget LA. But at the same time, we'll have to see what's good for the family." 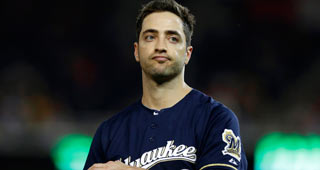 Recent reports have suggested that the Los Angeles Dodgers nearly sent Yasiel Puig as part of a package to the Milwaukee Brewers for Ryan Braun.

A source told Jon Heyman that "there was a lot of dialogue but [a swap] was never close."

Regardless, it seems as though the two clubs could revisit talks this winter.

Regardless of whether or not the Los Angeles Dodgers reach the playoffs, Vin Scully says the last game he'll broadcast will be the team's regular-season finale.

The 88-year-old announcer's Hall of Fame career will end Oct. 2 in San Francisco. Scully had already said this would be his final season in the booth after 67 years, but until Tuesday had not announced whether he planned to call any potential postseason games on radio.

Scully says if he stayed on the air, he would be "saying goodbye like in grand opera, where you say goodbye 12 different times."

The Los Angeles Dodgers had interest in Ryan Braun when the Milwaukee Brewers claimed Yasiel Puig on waivers.

Given that interest, a source close to the Dodgers believes such a trade package will be revisited this offseason.

There are four years and $76 million remaining on Braun's contract, which the Dodgers can afford.

A day after Rich Hill's perfect game was cut short, more clarity was provided as to why the Dodgers starter didn't remain in Saturday's game against the Marlins.

Los Angeles manager Dave Roberts' decision to pull Hill after seven innings of a perfect game is what drew the most attention late Saturday night, but there also seemed to be somewhat of a discrepancy as to why the move was made.

Roberts said there was a "hot spot" on Hill's finger, indicating that the pitcher's previous battles with blisters could arise if action was not taken. Hill, though, said afterward that he was not having any blister problems.

Rich Hill's shot at personal history was cut short Saturday night so that the Dodgers could get a better focus on the team journey.

Carrying a perfect game through seven innings, Hill was removed after 89 pitches against the Marlins, and the bullpen was pressed into duty. With a combined perfect game four outs away, Jeff Francoeur singled to left field off the tip of shortstop Corey Seager's glove with reliever Joe Blanton on the mound.

Three Dodgers relievers were called upon to finish off the 5-0 Dodgers' win over the Marlins, who ended the night with two hits.

So with Hill at 89 pitches, rookie manager Dave Roberts made the move that likely will be scrutinized for some time.

"I feel sick to my stomach," Roberts said immediately after the game. "Rich obviously had a perfect game and an opportunity of a lifetime. Just to take the personal side and understand there's a great opportunity for him and his family, his teammates. But as a manager, you're taking a lot of different information as far as we've been dealing with Rich's blister. That's cost him a lot of time this season."

Clayton Kershaw gave up two runs on five hits over three innings against the Marlins on Friday night.

Clayton Kershaw started for the Dodgers' Class A team at Rancho Cucamonga on Saturday night.

The Dodgers also pursued Ryan Braun before the non-waiver deadline.

The Dodgers intend to try to re-sign at least four of their prominent free agents this offseason -- Rich Hill, Kenley Jansen, Justin Turner and Chase Utley.

Diamondbacks Not Interested In Trading Shelby Miller This Winter

They reportedly listened to interest from the Dodgers after Zack Greinke cleared waivers.

The Dodgers have called up Yasiel Puig and he'll be with the club if travel goes well, according to sources.

The Dodgers approached the Diamondbacks about a potential Zack Greinke trade after the pitcher cleared revocable trade waivers earlier this month, according to a report.

The team was more interested in blocking Yasiel Puig from going to another team than in trading for him, according to a source.