The Baltimore Orioles are unlikely to promote top prospect Ryan Mountcastle as a September call up this month, according to a report.

Mountcastle was the 35th overall pick in 2015 (supplemental round) and ranks among the club's top five prospects.

His defense is considered an issue and some scouts believe he lacks a true defensive position. 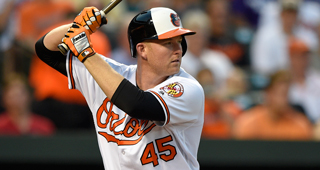 Orioles designated hitter Mark Trumbo has been reinstated from the 60-day injured list and was in the lineup for Monday's game against Tampa Bay after missing more than a year with a knee injury.

Trumbo doubled and drove in a run in the sixth inning of today's game.