Orioles Pitcher, Coach Get In Argument Over Shifts

On Wednesday night, Baltimore Orioles pitcher Richard Bleier had to be separated from Jose David Flores, the team's infield coach, over an argument about defense positioning.

It marked the second time in just three weeks that a Baltimore player and coach argued during a game.

It all started when Bleier gave up a single to Anthony Rendon and then had Juan Soto hit a grounder right off of second base. The defense was shifted to the right, and the switch backfired, as the ball made it through the infield. It very easily could have ended up as a double play to end the inning.

After the game, Bleier discussed the incident, admitting he was upset at Flores for the defensive decisions made and said his emotions got the best of himself:

"I think I just let frustration kind of boil over, some stuff about some balls that I thought maybe … defensive positioning, I guess. I probably could have done better for myself to keep my mouth shut, and unfortunately, I may have said something. You guys saw the rest."

Orioles general manager Mike Elias has fired 11 members of the scouting department and front office as part of an effort to turn around a team in the early stages of a major rebuild.

Elias announced the personnel moves Friday. The rookie GM would not reveal the names of those people dismissed, nor the positions impacted.

The Baltimore Orioles gave up their 258th home run of the season on Wednesday night, tying the 2016 Cincinnati Reds for the most allowed by a team in a single year.

The record was tied in the top of the third inning when Whit Merrifield of the Kansas City Royals hit a fastball from Aaron Brooks over the left-centerfield wall.

"We've given up a ton of homers," Brandon Hyde said. "What's the record ... 258? So, if it's 259 or 330, I don't care. I just want us to get better on the mound and obviously finish this year and go into next year trying to do a better job of keeping the ball in the ballpark and staying off the barrel, but home runs are up. ... We're all tired of seeing them and hopefully we can get better going forward."

After allowing seven home runs during their doubleheader against the New York Yankees on Monday, the Baltimore Orioles stand alone historically.

The Orioles have allowed an American League-record 248 home runs this season. It took them just 119 games to set the mark.

The Major League record for home runs allowed is 268, by the 2016 Cincinnati Reds. The Orioles are on pace to allow more than 330 home runs this season.

The Baltimore Orioles defeated the Houston Astros 8-7 on Sunday, one of the biggest upsets in Major League Baseball over the past 15 years.

The Orioles were listed as high as +420 underdogs.

The Astros were one of the largest single-game favorites ever. They closed as -460 favorites at Caesars Sportsbook but could be found as high as -550 favorites at Station Casinos' sportsbooks in Nevada. 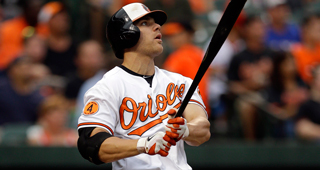 Chris Davis had to be restrained during a clash in the dugout with manager Brandon Hyde during Wednesday night's game between the Baltimore Orioles and New York Yankees.

Hyde lifted Davis for pinch hitter Jace Peterson in the fifth inning. Shortly afterward, the MASN broadcast showed a clip of Davis getting into a heated exchange with Hyde, which resulted in him having to be restrained.

"It was just a disagreement that we had in the dugout," Hyde said. "What was said and what we talked about, I'm not going to get into. We're going to keep it in house, and it's private. It's something that happens sometimes and frustration boils over a little bit when we're not playing our best baseball the last couple of games. Unfortunately, I'm embarrassed it was caught on camera and people had to see it, but sometimes those things happen."

Hyde said he took the veteran first baseman out of the game.

"We had words and I took him out of the game," the manager said. "Me and Chris have a good relationship and these things happen in competitive environments and it's something that'll pass and we'll get through it, but it's unfortunate that it happened in the dugout."

Jonathan Villar enjoyed a memorable night during an otherwise forgettable season for the Baltimore Orioles on Monday.

Villar became the fifth Oriole to hit for the cycle and the first since Felix Pie on Aug. 14, 2009.

He tripled in the third inning, doubled in the fifth, homered in the sixth and dumped a single into right field in the ninth.