After more than six years in the minor leagues, Mike Yastrzemski -- the grandson of Hall of Famer Carl Yastrzemski -- will make his major league debut Saturday after being called up for the first time.

Yastrzemski will start in left field for the San Francisco Giants and will bat seventh against the Arizona Diamondbacks.

Yastrzemski, 28, was traded to the Giants in March by the Baltimore Orioles, with whom he made his first big league spring training this year.

According to a source, Cron will be added to Arizona's roster for this weekend's series against the San Francisco Giants.

The 26-year-old is the younger brother of Minnesota Twins slugger C.J. Cron. He leads the Minor Leagues with 21 home runs and 62 RBIs over 44 games with Triple-A Reno this season. 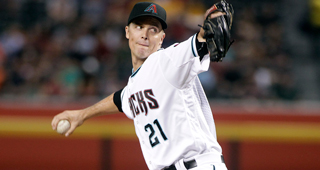 Zack Greinke recorded the 2,500th strikeout of his career on Tuesday night as the Arizona Diamondbacks took on the San Diego Padres.

The right-hander is just the 37th pitcher to reach the milestone in Major League history.

The Arizona Diamondbacks are moving Zack Godley to the bullpen.

Torey Lovullo has yet to decide who will replace Godley in the club's starting rotation.