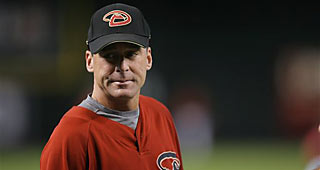 The D-backs have reached an agreement with Bob Melvin on a contract extension through the 2010 season, a source with knowledge of the negotiations told MLB.com. An announcement is expected within the next few days.

Former Arizona Diamondbacks' player Alex Cabrera on Saturday denied ever using steroids after his name appeared in the Mitchell Report. The report chronicles the discovery of a bottle containing steroids in the Diamondbacks' clubhouse in September 2000. A clubhouse employee found the bottle and several hundred pills in a package that had been mailed to Cabrera, according to the report. "I couldn't have used the substances that are identified," Cabrera said. "I never had possession of the alleged box that supposedly contained the pharmaceutical drugs." Cabrera made his denial on the Web site of the Caracas Lions, his winter league team in Venezuela. He could not be reached for comment. The substances were sent to the commissioner's office by then-general manager Joe Garagiola Jr. and later passed on to the U.S. Drug Enforcement Administration to be analyzed. 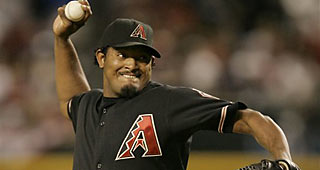 The Astros found a closer Friday, when they acquired righthander Jose Valverde from the Diamondbacks in a four-player trade. The Diamondbacks received infielder Chris Burke and righthanders Juan Gutierrez and Chad Qualls in the deal. 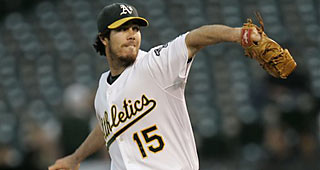 The Oakland A's sent All-Star Dan Haren and prospect Connor Robertson to the Arizona Diamondbacks on Friday for pitchers Brett Anderson, Dana Eveland and Greg Smith, infielder Chris Carter and outfielders Aaron Cunningham and Carlos Gonzalez. Haren will join a talented pitching corps that already includes Cy Young Award winner Brandon Webb and starters Doug Davis and Livan Hernandez that helped carry the D-backs to the 2007 National League Championship Series. Arizona also hopes to get Randy Johnson back from injury next year. "We are thrilled to acquire Danny Haren. His addition will bolster an already-strong starting staff and will help stabilize our roster over the next several years," Diamondbacks Senior VP/GM Josh Byrnes said. "Our success in scouting and player development allowed us to make a rare trade like this. We certainly traded many quality players, but we have the youth and depth to justify such a trade."

The Kansas City Royals have acquired switch-hitting infielder Alberto Callaspo from the Arizona Diamondbacks in exchange for right-handed pitcher Billy Buckner. The 24-year old Callaspo (Ky-AWS-po) split his 2007 season between Triple-A Tucson and the Diamondbacks. He hit .215 (31-for-144) with eight doubles, seven RBI, nine walks and 14 strikeouts in 56 games for the N.L. West champs, appearing mostly as a pinch hitter. Callaspo dominated the Pacific Coast League, hitting .341 (77-for-226) with 15 doubles, five home runs, 30 RBI and 48 runs in 59 games for the Sidewinders. "The addition of Alberto continues to increase the versatility on our team," Royals' General Manager Dayton Moore said. "He is a young, tremendously skilled player with a great eye at the plate and very solid defensive skills at three infield positions." A 5-foot-10, 170-pounder from Maracay, Aragua, Venezuela, Callaspo made his Major League debut for the Diamondbacks in 2006 after being acquired from the Los Angeles Angels in exchange for pitcher Jason Bulger on Feb. 28, 2006. He has posted a .220 (41-for-186) career average in 79 big league games, with nine doubles, one triple, 13 RBI and 12 runs scored. Callaspo has made appearances at second base, third base, shortstop, left field and right field in his young Major League career but was primarily a second baseman at the minor league level. Originally signed by the Angels as a non-drafted free agent in 2001, Callaspo hit .337 (165-for-490) with 24 doubles, 12 triples, seven home runs, 68 RBI and 93 runs scored in 114 games with Tucson in 2006 on his way to being named the Diamondbacks' Minor League Player of the Year. He led the PCL in runs, finished second in average and triples and fourth in runs scored. He continued a career-long trend, drawing 56 walks while striking out just 27 times. In both 2004 and 2005, he was the toughest player in the minor leagues to strikeout, fanning a total of 55 times in 1,225 plate appearances.

The Diamondbacks took five players ? Stephen Drew, Mark Reynolds, Max Scherzer, Justin Upton and Chris Young ? out of all discussions for Dan Haren, yet the A?s still were interested enough in Arizona?s deep base of young talent that the two sides are talking seriously. The D?backs are so deep that reliever Tony Pena and first baseman Conor Jackson also are not part of these talks. Outfield prospect Carlos Gonzalez would be a central piece should there be a deal. 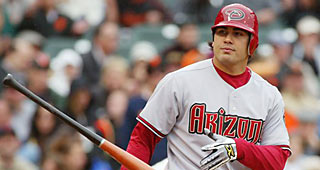 The Diamondbacks are set to trade outfielder Carlos Quentin to the White Sox for minor league first baseman Chris Carter, PA SportsTicker learned Monday. According to sources inside Chicago's organization, the sides have agreed to the deal, but it has not officially been announced. 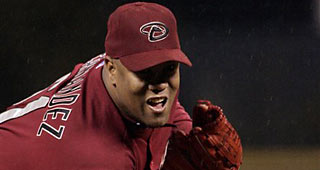 The Diamondbacks will offer salary arbitration to right-hander Livan Hernandez at today?s deadline, but they neither expect him to accept or particularly want him back. The D-Backs will make the offer because Hernandez is a Type B free agent and as such would bring them a supplemental first-round choice in the 2008 draft as compensation if he signs with another team. Hernandez has until Thursday to decide, but he is expected to reject the offer and test the market because he could sign a long-term contract rather than receive simply a one-year deal from the D-Backs.