Grading The Deal: Mike Moustakas Finally Settles Down In Cincinnati 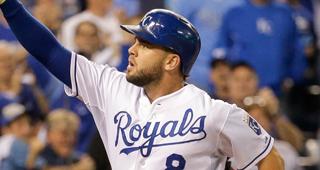 So far, the early runnings of MLB’s long, cold winter are shaping up to be a little less hoarfrosty than we’ve come to expect. The Padres have been wheeling and dealing (as any A.J. Preller managed team is wont to do), Yasmani Grandal already got a much deserved long-term deal and now we’ve some more feel-good ink on the books with the Reds reportedly signing Mike Moustakas to a four-year, $64 million deal. Sure, we could focus on the all the players getting ditched by their teams, but we’re going to focus on something far more tender than the non-tendering side of baseball wheeling and dealing.

Moustakas, like his ex-Brewer teammate Grandal, was a poster child for the ills of MLB’s current labor situation. After hitting free agency in 2017 with a .272/.314/.521 season with 38 home runs in a pretty weak free agency class, it was widely assumed that he’d land a multi-year deal somewhere, even if his low OBP was going to keep him out of the upper echelons of free agent contracts. The one-year, $6.5 million deal he signed with the Royals was more than a little disappointing for the two-time All Star (who’s now in possession of a third). After a midseason trade to Milwaukee in 2018, he had to settle for another one-year deal with the Brewers last offseason, this time for $10 million.

While the timing of Moustakas’ hitting free agency wasn’t ideal, with a decreased interest in sluggers with less than stellar base-reaching issues, he was still an above average hitter over all, thanks to the fact that he was, well, a pretty stellar slugger. Since 2015, he’s posted a .491 SLG and never gone lower than a 100 wRC+, only falling short of 2.0 fWAR in his injury-shortened 2016. If you want to focus on the most recent season, he just posted the best walk rate of his career (9.1 BB%) in 2019.

So, we’re basically talking about a clearly above-average, if imperfect, player with a long track record of success who actually showed improvement in his most recent season. Seems like he might’ve always been a player worth signing to a deal for more than a single season. It’s also probably worth mentioning the “off the field” stuff, too, because, even if it’s not wise to give too much weight to intangibles, Moose is pretty much universally regarded as a boon in the clubhouse and the Reds were one of the younger teams in MLB last year.

But it’s not just a grizzled veteran the Reds are adding, because Moustakas gives their offense a seriously needed bump. Non-pitcher Reds posted a collective 94 wRC+ in 2019, with only Eugenio Suárez being particularly impressive at the plate. The Reds’ rotation was shockingly good last year and now they’ve gone and improved their offense in the relatively weak ecosystem that is the NL Central. Moustakas alone isn’t going to propel the Reds to a World Series appearance, but he might be enough to push them into the postseason for the first time since 2013.

Moustakas will be 35 when this deal is over and, if you happen to be a soulless computer crunching numbers, you can probably find a bone to pick here. Did Cincinnati overpay for Moustakas? Quite possibly, but it’s tough to say. The contract is far from crippling and it’s likely about market price. In a time when the haves are tamping down on spending for everyone but the most marquee free agents and the have-nots are either tanking or taking advantage of the fact that those rich teams won’t spend, it’s refreshing to see teams that are on the cusp of contending sign a player who makes their team better to a pretty much totally reasonable contract.

Grade: A’s all around