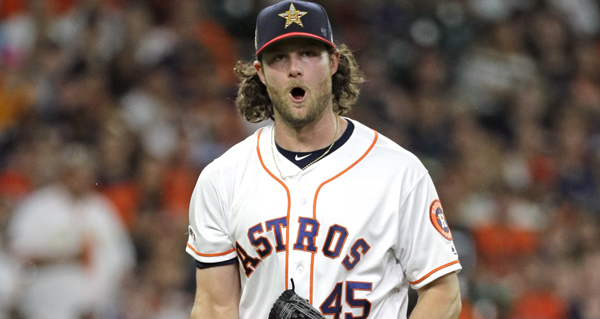 It’s a big week for MLB, as much as any week can be “big” after the World Series and before Spring Training rolls around. MLB Awards are being rolled out (and if you want to refresh your memory, we’ve got you covered for the Rookie of the Year, Cy Young and MVP awards). The General Managers Meetings are also going down in Scottsdale. While we probably shouldn’t expect much to happen, you never know, and, at the very least, the groundwork is being laid for the rest of the Hot Stove Season. We’ve got a long, cold winter ahead of us, but for now let’s take a look at my picks for the best baseball players that are available in this surprisingly deep free agency class. All your team has to do is plunk down a big chunk of many millions After all, there’s no such thing as free free agents.

The 29-year-old is coming off an incredible season heading into free agency. His 39.9% K-rate was not only the best in 2019, but the best in the history of the sport among qualified starters as far back as we’ve got that stat to work with, better than some pretty famous pitchers like Pedro Martinez, Nolan Ryan and Randy Johnson, to name a few. The fact that he started 25 games from May 27 through Game 3 of the ALCS without taking a loss gives some idea of how dominant he was in 2019, and he’s arguably been the best pitcher in baseball dating back to his move to Houston. His relative youth, combined with the ability to hit velocities over 100 MPH, mean he’s probably going to receive a record-breaking contract, and might very well be able to live up to his end of the bargain. Unless you’re actively tanking (and even if you are, there’s an argument to be made you should still go after him), there isn’t really a team in baseball that couldn’t use a pitcher like Cole.

Third base options run very deep this offseason, but there’s no question that Rendon is the best option for the hot corner and the best position player available, period. After being overshadowed during Bryce Harper’s time in Washington, Rendon finally got the non-National, national attention he deserved this year with Harper gone, hitting .319/.412/.598 with 34 home runs and being the best position player for the reigning champs. What’s really remarkable is that, aside from his rookie season and an injury-shortened 2015, how consistently great he’s been while flying under the radar. Over the past three seasons, he was the fourth most valuable position player in MLB by fWAR (19.9), behind only Mike Trout, Mookie Betts and Christian Yelich. While he’s older than either Manny Machado or Harper were last year, as he’ll turn 30 next June, he’s been better than both of them over a longer stretch. Every contender with a need at third base should start their offseason figuring out how to make a Rendon signing work.

The Nationals have a tough road to hoe this offseason, as they’re potentially losing more than just Rendon this offseason. Strasburg was an absolute workhorse for Washington, pitching 209 innings with a 3.32 ERA and accumulating a National-League-best 18 wins in the regular season before going 5-0 with a 1.98 ERA in October. At 31 years old, Strasburg is older than Cole, but he’s been extremely good and is quite far removed from the Tommy John surgery and the innings limits that defined the start of his career in Washington. The good news for any team that signs him? He has less mileage on his arm than his age might indicate. While Strasburg isn’t one of the finalists for the Cy Young this year, that doesn’t mean he wasn’t a deserving candidate and he’s going to tightfully collect from somebody, whether it’s the Nationals or not.

Our first non-World-Series-appearing player on the list, Grandal fell victim to MLB’s ongoing labor issues last offseason and took a one-year, $18.5 million deal that was extremely odd given the fact that Grandal was the second most valuable catcher in baseball from 2015 to 2018, behind only Buster Posey. He was great again in 2019, hitting .246/.380/.468 and putting up 5.2 fWAR. He’s a plus-defensive catcher and one of the better framers in the sport, but unlike so many other catchers who are fine behind the plate, but no fun to watch when they’re at it, his bat would play well at any position. Sure, he’s a 31-year-old catcher, but he’s more than deserving of the three or four-year deal he’s going to get this offseason now that teams don’t have to worry about the pesky qualifying offer costing them a draft pick.

Like Grandal, Donaldson had to take a one-year deal last offseason and, also like Grandal, he certainly lived up to his end of the discount deal he signed with the Braves. He put his injury-shortened 2018 in the rearview and hit .259/.379/.521 while providing some highlights defensively en route to 4.9 fWAR. The qualifying offer he received from the Braves will probably affect the deal that he ends up receiving, but he should still get paid this year. Donaldson will turn 34 in December, and his days of winning an MVP are likely behind him, but that doesn’t mean that you should be upset if your team gives him a three-year deal. He’s still one of the best hitters in baseball and the next best thing for shelling out for Rendon.

Wheeler is one of the tougher nuts to crack on the list, and it seems like everyone has a very different opinion on him. Point: He won’t turn 30 until next May and is coming off two straight seasons where he was worth over 4 fWAR and pitched over 180 innings. Counterpoint: You can’t neglect the injury history, and there isn’t the sustained success that the pitchers above him on the list have. Point: He’s one of the hardest throwing starters in baseball and he’s greatly improved his control to a career-best 2.30 walks-per-nine. Counterpoint: S-H-O-U-L-D-E-R. I’m firmly in the “Point” Camp here, because there’s just so much upside with Wheeler that it’s probably worth putting in for the four years he’ll likely receive. Wheeler is far enough away from his surgery and, in a different ballpark with a better defense behind him, he’ll probably be even better than he was in 2019. Sure, there’s a risk here, but he’s also going to cost less than Cole or Strasburg and it wouldn’t surprise me in the least if he ended up providing more value to this team based on terms of the contracts.

Up next is another pitcher who’s dealt with injuries, only this time it’s one who’s going to turn 33 on the second day of the 2020 season. After accepting the Dodger’s qualifying offer last offseason, Ryu had the best year of his career in 2019, pitching the most innings since his rookie year in 2013 (182) and leading all of MLB by ERA (2.32). Sure, ERA doesn’t tell the whole story, and Ryu faded down the stretch, but he was still worth about five WAR by all of WAR’s various permutations. His age and his workload and injury history are going to keep him from reaching anything near the sort of deal that the pitchers above him on the list are going to get, but if we’re talking solely about the potential for providing value for his team over a shorter contract, he’s an intriguing combination of upside and cost-efficiency compared to the other pitchers on our free agency leaderboard.

What’s that you say, another starting pitcher from the NL West? 30-year-old, 2019 Bumgarner isn’t the same pitcher that he was as a 25-year-old in 2014 when he carried the Giants on his back through the postseason en route to their third championship in five years, but he bounced back from a couple of short seasons to start 34 games, throw over 200 innings and post a 3.90 ERA. His velocity still sits in the low 90s and his offspeed pitches still play very well. He certainly isn’t the ace he once was, but his contract is going to reflect that and, If you’re looking for an innings-eating workhorse to slot into the middle of the rotation, you could do a lot worse than Bumgarner.

Gregorius had a rough 2019. He spent the first part of the year recovering from Tommy John surgery, watched Gleyber Torres blossom and then struggled in the ALCS. But he’s about to get a full offseason to rest up and recover, and is a solid bet to return to something approximating the 270/.312/.467 slashline he put up over the prior four seasons. Gregorius plays a premium defensive position very well and hits, to boot, which is why he was worth over 4 fWAR in both 2018 and 2019. The lack of need at shortstop might hurt his bottomline over the offseason, but the fact that the Yankees failed to extend a qualifying offer to him means that any team can take a chance on a resurgent one-year deal, or lock him up for a few if they choose to do so. There are far worse players to take that sort of chance on this offseason.

Castellanos has been been a rather excellent hitter the past couple years, slashing .294/.346/.513 for a 126 wRC+ that ranks 26th in MLB. After his trade to the Cubs this summer, he hit .321/.356/.646. While that wasn’t enough to get the Cubs into the postseason, it should serve as a reminder of what Castellanos can do in a more hitter-friendly ballpark. He also turns 28 during Spring Training and has no qualifying offer attached to him. The canary in the coalmine, and the thing keeping Castellanos from being higher up on the list is his defense. It has not, shall we say, been great, as he’s been the worst right fielder in MLB over the last couple seasons by both DRS and UZR. Despite the defensive issues, he’s still been a three-win-a-year player and his bat is solid enough that he should remain that level of player for the next four-ish years he’s likely to receive.

If you’re an NL team with no DH option, then you’ve got a very solid option for an outfielder with better defensive skills in Ozuna. He turns 29 tomorrow and has consistently put up above average offensive numbers, including his ridiculous 2017 where he hit 312/.376/.548. While the last couple of seasons with St. Louis haven’t been up to that level, he has continued to post excellent exit velocity numbers and seems to have suffered from some bad luck at Busch Stadium. His age, defensive capabilities and potential for another big year make him a respectable bet for any team in need of a corner outfielder.