Come Together: Thoughts On The 2019 Hall Of Fame Class 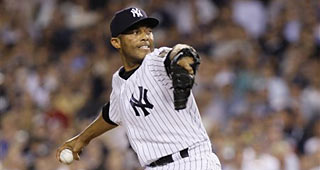 Thus, we continue our steady slog towards opening day, waiting for many of the best free agents to find teams, and things continue to look problematic. There’s been little recent roster news of which to speak, unless you’re into bounceback candidates on cheap deals (see: Drew Pomeranz, Cody Allen). While I’m tempted to use Ichiro’s signing in Seattle as an excuse for more Wizard love, there’s other happenings worth our time, because at least we’ve got Cooperstown.

We learned this week that the Baseball Writers Association of America is sending Mariano Rivera, Roy Halladay, Edgar Martinez and Mike Mussina to the Hall of Fame this year. That’s a historic class, for a number of reasons, with the first being that we’ve got four folks headed to the Hall, continuing to help clear out the current logjam.

Things have gotten tricky in the past handful of years, what with all of the different takes on MLB’s PED era and some voters’ decisions to simply refuse to consider any player who happened to play during that time, regardless of whether or not they there’s actual evidence they even used any banned substances. 2013’s embarrassing lack of any inductees didn’t do anybody any favors, but at least now voters are starting to pick up some of the slack, sending four folks to the Hall in back-to-back years, and for the third time in five years.

In addition to the fact that voters kept the line moving, we can finally put to bed the thought that people can never agree on anything. It may have taken the Hall over 80 years, but we finally have the first player in MLB history to get 100% of the voting populace in his corner in Rivera. Babe Ruth (95.13%), Ty Cobb (98.23%) and Willie Mays (94.68%) couldn’t do it. Ken Griffey, Jr. (99.32%) came the closest three years ago and still fell short.

Rivera is MLB’s all-time leader in saves (652), games finished (952) and ERA+ (205). And, as good as he was during the regular season, he was even better when all eyes were on him in the postseason, with a 0.70 ERA and 0.759 WHIP over 141 IP. That’s basically what we’re starting to see as a starter’s season, except that he allowed a total of 11 earned runs, and it was on the biggest stage in the sport and with basically one pitch, albeit a glorious one. So, yes, Rivera was basically a sure-thing first ballot Hall of Famer, but that doesn’t mean that haters were going to go down without a fight.

There have always been the select few that have played the contrarian, and made the argument that, hey, if the greats from the past didn’t get in unanimously, then no one else was going to. But sports have changed in so, so many ways from the days of the Great Bambino and the Say Hey Kid. Now, we can watch any team play whenever we want, on a device we can carry around in our damn pockets. When someone does something special, we can watch highlight reels (just so long as MLB.tv deems it acceptable). We don’t have to scour the papers every day for box scores, we can just head over to Fangraphs or Baseball Reference and sort away to our collective hearts’ content. WAR has been an invaluable tool in accounting for era and position (even if my less statistically-oriented friends and family still wonder what the hell I’m talking about when they read my articles).

That’s not to say that there won’t be plenty of arguing about this sort of thing in the future. Every reliever is just a failed starter and all that. There have always been contrarians and there will always be, but for just one moment, we got everyone to come together and agree on something: Rivera was the best reliever to ever grace baseball, and he deserves a place in the Hall of Fame.

While Rivera’s unanimous induction might be the biggest surprise, given baseball’s history, Martinez making in it was also noteworthy. I grew up in Houston back when the Astros played actual baseball and I have zero love for the DH. That being said, if the rules of the game are thus that there is a position that exists, we should probably honor the best players to play said position with a place in the Hall of Fame.

And Martinez was unquestionably one of the best designated hitters ever. Over 2055 games, dude had a .418 OBP. That’s better than Mike Trout and a tick worse than Mickey Mantle. I’m not going to lie, I didn’t watch a lot of Mariners games in my formative years. But, thanks to watching a lot of Barry Bonds during a 12-year stint in San Francisco, I know what it feels like to watch someone who is almost as likely to get on base as not. Every. Single. At. Bat. It is something special. The kind of thing that belongs in a shrine that is dedicated to the people who make a sport worth watching.

Regardless of your views on a big versus a small Hall and on the PED era, the Hall of Fame is presumably supposed to be a collection of the best players in baseball history. At the end of the day, Martinez had 68.4 bWAR, tied for 115th in MLB history, and probably belongs in a Hall of Fame with hundreds of members, even if his position tends to get overlooked.

While Rivera and Martinez’s entry into the Hall both give credit to the more historically underappreciated positions in the sport, Mussina and Halladay were starters and had different bars to clear. If there was a knock against Mussina, it was that he (a) wasn’t as good as some other folks currently languishing in PED territory and (b) doesn’t have the rings and awards that we typically associate with players who end up in the Hall. Despite the fact that he only placed as high as second in Cy Young voting and never managed to find himself in the right place at the right time to win a World Series (despite pitching for the Yankees for almost a decade), his 18 years of 123 ERA+ pitching and 82.9 bWAR won the day.

The final inductee, Halladay, passed away approximately 14 months ago at age 40, and is the first player to be inducted posthumously by the BBWAA since Roberto Clemente in 1973. He might not have been as good for as long as Mussina, but the highs were still extremely high and the Hall will be richer with him in it.

From 2002 to 2011, Halladay had a 2.97 ERA/148 ERA+, and he was one of the scariest pitchers your team had to face (as I can attest to from, again, my time in San Francisco when the Giants faced the Phillies in the 2010 NLCS). We’re going to have to recognize the fact that we aren’t going to see pitchers having careers that are as long and as storied as we used to, and Halladay’s induction is a step in the right direction. Now, we’ll have to wait until we see another starting pitcher make it in on the first ballot. CC Sabathia and Justin Verlander are the only obvious candidates, but they’re both still pitching and aren’t sure things, either. Where we go from there with pitchers is anybody’s guess.

So that’s our graduating class of 2019, and, while I’m happy with the results, I’ve still got quibbles. Bonds and Roger Clemens moved the needle very little and it’s looking more and more like it’s going to come down to the wire on their tenth and final year of eligibility to make it in, if they make it in on the writers’ vote at all. If you want to put Bonds and Clemens in a special wing and call it the Hall of Infamy, so be it. Require folks to apply a pine tar cross to their shirts before they go in, and chew tobacco and spit on Bonds and Clemens visages before they leave. But they should probably still be included in a museum about the history of baseball.

All in all, though, it was mostly a good year for the BBWAA and for the Hall of Fame. We can end the stupid unanimous thing and we cleared up some space for the coming classes. But, most importantly, the most deserving players (non-Bonds/Clemens division) made their way into the Official History of America’s pastime and we can go back to what we’ve done all offseason. Waiting for somebody to sign Manny Machado and Bryce Harper.