A Treatise On The Omnipotence Of God (Of The KBO) 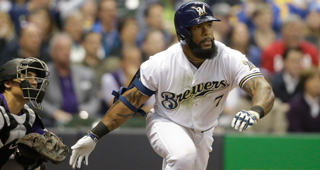 In the early goings of each season, with far fewer numbers to work with and much more emphasis on the limited numbers we do have, there are lots of narratives. Stories, if you will. Last year’s biggest was Trevor Story. This year, that honor belongs to Eric Thames and ‘tis Thames’ time. While he left the Brewers’ game on Wednesday in the eighth inning with a tight hamstring, he’s already etched his way into the history books, no matter what happens.

Quick pre-2017-season recap: Thames couldn’t stick in his first attempt at the MLB, mostly because he struck out far too much and walked far too little. He came up in 2011 and then, in 2012, he struck out in 30.0% of his PAs and walked in 5.0% of them. After a year back in the minors, he headed to Korea. It’s fair to say that he thrived there, highlighted by his insane 2015, where he hit .381/.497/.790 with 40 stolen bases to go with his 47 home runs and earned the delightful nickname “God.” The Brewers signed him this offseason to a three-year, $15 million deal, which was one of the big reasons I was high on the Brewers’ offseason. So far, it’s turned out better than anyone could possibly have imagined.

With almost a month of the season behind us, the stat that’s getting the most attention, obviously, is the fact that Thames is leading the league in in home runs with 11, which is exactly as many home runs, as of today, as the Boston Red Sox as a team have. If we adjust for a whole season (with Thames playing in 140 games since he’s played in 20 of the Brewers’ 23 games so far), Thames would hit 77 home runs, which would best Barry Bonds’ single season by four home runs. Not to mention the fact that Bonds needed 153 games to get to there.

His OPS+ is 263, which, over a full season, would put him in a tie for the second best OPS+ in MLB history with Barry Bonds’ 2004 season (behind only Barry Bonds’ 2002, of course). Perhaps the most telling stat, at least going forward, is that Thames is currently sporting a 52.4% HR/FB rate, which means that he is literally hitting a homerun over 50% of the time that he hits a fly ball. That. Is. Insane. For reference: Bonds topped out at 29.7% in 2001

The cynics out there are lining up and whispering (or besides some folks in the Cubs’ organization who got the whole thing rolling, perhaps it would be more appropriate to say they are “attempting to ‘yell’ as loudly as possible from a comments section”) that Thames is on PEDs. First of all, we should be at a point where people recognize the ridiculousness of this sort of speculation, even if Thames is absolutely ripped. If Dee Gordon, who looks about as much like a PED-user as I do like George Clooney, and his suspension didn’t dispel the notion that we shouldn’t be judging books by their covers, I don’t know what would. Thames has already been tested three times, so folks should probably lay off the PED accusations until there’s some evidence and just sit back and enjoy the show. (It should also be noted that Thames is on the record as saying he has “lots of blood and urine,” which is just about perfect.)

Sure, he’s a 30-year-old baseball player whom most of us had forgotten about having success at an unprecedented level. But these things happen, and it’s only thanks to the fact that it’s happening right at the beginning of the season that we are all paying so much attention to it. Thames has a different routine now and has been hitting in a different league for multiple years. We never know how a player’s abilities are going to translate to the MLB, and then you can combine that with the fact that we’ve seen plenty of players blossom in their late twenties. The real answer here is that Thames is a much improved player who radically improved his plate discipline and, if we’re being honest, has had a heaping helping of luck, as well.

That HR/FB rate that we talked about earlier is clear insanity and there’s simply no way it can continue. Pitchers are going to adjust how they pitch Thames and there’s simply no way that all of those fly balls are going to make it out of the park. That doesn’t mean we can’t enjoy it right now, though. Here’s to hoping that Thames’ removal from the game was precautionary and that he’s back soon to crush the absolute snot out of the ball for a little bit longer before this beautiful thing ends. And if it does actually continue, I look forward to Thames breaking some records in the intentional walk department.